Most probably, Nizza  –  whose etymological root is connected to the property of a set of Manors called ” Nice or Nicia” –  throughout the Middle Ages was also referred to as ” the town of straw “, due to its numerous thatched roofs, or most likely  because of the proximity of a watercourse whose banks were full of easily dryable herbs. 1225  is claimed to be the year of the town’s foundation, made possible by grouping  the inhabitants of seven surrounding castles.

In 1264 it became part of the Marquisate of Monferrato and in 1268 the city underwent the first of a long series of sieges by Carlo d’Angiò which inevitably affected its entire history. The most famous occurred in 1613, when the Savoyard forces led by Count Aldobrandino San Giorgio – after having occupied Alba – moved towards Nizza. The attack started on the 12th of May and  went on for 12 days against the defenders led by Governor Manfrino Castiglione. At the end of the first day (12 May), while a crowd gathered in the Franciscan Order’s Church of the “Frati Minori Osservanti” ( currently Saint John’s Church), begging for God’s help, the miracle of the lamp occurred in the Chapel dedicated to Saint Charles. The lamp lit up by itself and went on burning for a long time even without a wick. 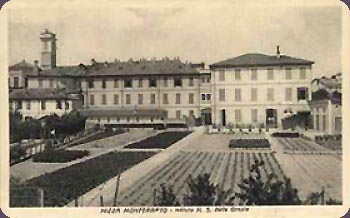 After 12 days numerous reinforcements arrived, forcing Count San Giorgio to retreat. Later on – during one of the many sieges, the lamp was removed from the Chapel and buried. Legend has it, that one day, a horse – passing by the place where the sacred object was hidden, suddenly reared up and started rasping so violently that the lamp emerged from the ground and was brought back to the Chapel.

In 1796 during the French invasion, a priest, Father Ameglio, brought the lamp to his house in order to avoid a possible theft. Unluckily though – as he died before the French retreat , the lamp disappeared without trace. As a testimony of its existence, in the present parish of San Giovanni in Lanero we can still admire a black marble plaque adorned with golden characters in memory of the famous miracle. The city of Nizza remained under the rule of the Gonzaga family until the eighteenth century, then under the local feudatories and lords of Mantua, such as the Crova Barons. When echoes of the French revolution reached these lands, several violent clashes occurred between the population and the invaders. The inhabitants of Nice were forced to pay heavy tributes and suffered from robberies along with all sorts of destructions. To make things worse, terrible plagues led to a situation of general, severe decay. The usually flourishing activity of spinning mills had to stop, craftsmen lost their jobs and the countryside became a land of danger where wayfarers were frequently assaulted and robbed by bandits. When Napoleonic rule ended, Nizza reverted to the Savoy dynasty, allowing the quality of life to gradually get back to its former standards  –  especially thanks to Chevalier Pio Bernardo Corsi di Borasco,  who actively struggled for the rebirth of the town. He made sure that the borough was always clean and tidy, mended the roads so to restore trades with neighbouring villages – and also helped the market to grow, by giving it a much needed kick-start – since the city could count on a happy and fruitful topographic position.

Today Nizza Monferrato is a lovely small town located 267 meters above sea level, within a hilly territory whose landscapes and hillsides have been defined in literature as  “the most beautiful of Monferrato”.  Since this area is just perfect for the cultivation of strong and full-bodied grapes, Nizza is also known as  the “Capital of Barbera wine”.